Support Levels – Everything You Need to Know

Trading at support levels is one of the most rudimentary analytical techniques, yet one of the most effective. Some analysts predicate their entire strategy on support and resistance trading.

Support levels could be psychologically significant numbers, areas where the price movement has failed to hold on multiple occurrences, and even retracement levels. The potential reasons why a stock experiences support at certain price levels are many. The catalysts above are just a few examples of what causes these levels to manifest.

Figure 1.1 shows a major support level for $MSFT. Demand exceeded supply at the correlative price area, and sellers were unable to overpower buyers at the price area.

Trading at a major support level is an effective approach for a few reasons. A major level is likely to have formed on high volume, or, has remained in operation for quite a while. If strong buying occurs when prices test a major support level, we have a good chance at profit by entering long. Personally, I think the best advantage of trading major support/resistant points is the opportunity to mitigate losses quickly when the level is validly penetrated.

Amount of Time Level was Traded

Time Since Level was Traded

Let’s say stock XYZ were to rally up to the $200 level and then experience low volume while prices gradually fall back under the $200 level, this could be considered minor resistance.

Let’s assume that stock XYZ is trading at $395 and then rallies upwards to $400. At the $400 level, XYZ trades sideways with relatively high volume and validly penetrates the $400 level to the upside. Whether this takes days or weeks, the high volume sideways price movement at this level may lead to strong support in the future should stock XYZ ever re-test the $400 zone again.

Let’s dial-in on support and resistance levels which form during a trend. These levels are typically minor.

Figure 1.2 depicts a healthy uptrend with peaks and troughs. Each price peak forms a resistance level. Each price trough forms a support level.

For prices to sustain an uptrend; higher peaks and higher troughs are necessary, particularly higher troughs. Each peak formed during an uptrend constitutes a resistance point. Why? Well, prices reached a peak and then moved against the uptrend (bearish retracement). Selling intensity, whether due to profit-taking or short-selling, exceeded buying intensity at the peak price. Price peaks preceding a bearish retracement are typically minor resistance areas and are validly penetrated with ease during a strong uptrend. The final peak formed during an exhausting uptrend, prior to a complete change in trend, is likely to perform as major resistance if tested in the future.

The marked support levels in the illustration reflect termination of the bearish retracement, and the institution point of continuation for the uptrend. Think of it this way. An uptrend in motion requires demand > supply continuously. Due to natural supply/demand dynamics, there will be times in the uptrend where prices fall (bearish retracement). During a strong uptrend, this is likely due to position holders (buyers) closing their positions (selling their shares to the market for profit), and contributing to supply. Be sure to pay attention to the next sentence. When bullish sentiment and demand are strong, traders are eager to “buy the dip”. When an uptrend is strong, bullish sentiment is strong, traders are looking for opportunities to enter the uptrend. This lays the foundation for retracement percentages (discussed later in the chapter). We can evaluate the momentum/strength of an uptrend by identifying the percentage amount prices fall before continuing the trend. If traders are “buying the dip” expeditiously; prices will not “dip” to a large degree before continuing the uptrend. If so, we should conclude demand is strong, and the uptrend is likely to persist. We will dial-in on this later. 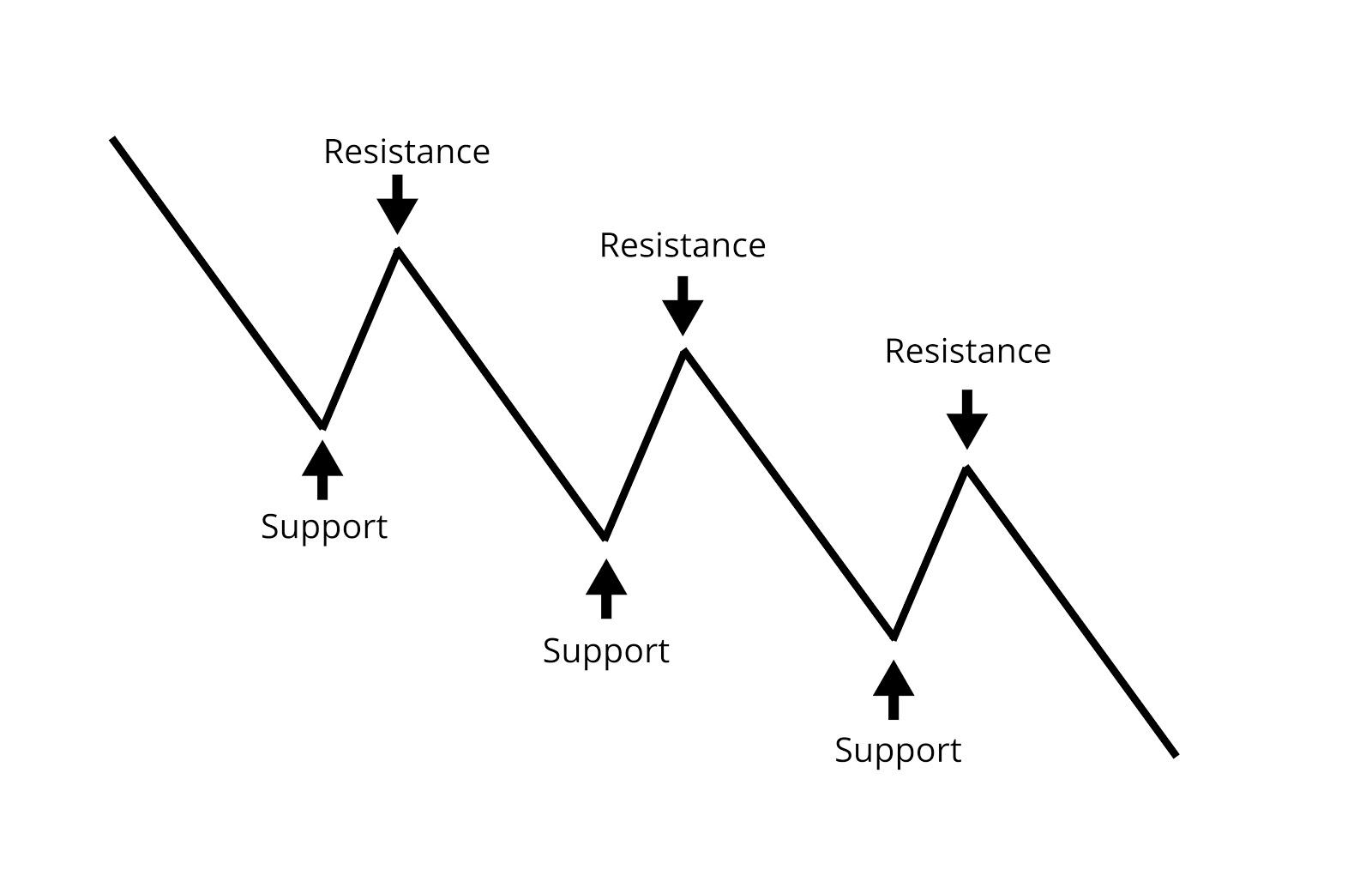 Figure 1.3 depicts a healthy downtrend with troughs and peaks. Each price trough forms a support level. Each price peak forms a resistance level.

For prices to sustain a downtrend; lower peaks and lower troughs are necessary, particularly lower peaks. Each trough formed during a downtrend constitutes a support point; prices reached a low and then moved against the downtrend (bullish retracement). Buying intensity, whether due to profit-taking or share buying, exceeded selling intensity at the trough price. Price troughs preceding a bullish retracement are typically minor support areas and are validly penetrated with ease during a strong downtrend. The final trough formed during an exhausting downtrend, prior to a complete change in trend, is likely to perform as major support if tested in the future.

The marked resistance levels in the illustration reflect termination of the bullish retracement, and the institution point of continuation for the downtrend. A downtrend in motion requires supply > demand continuously. Due to natural supply/demand dynamics, there will be times in the downtrend where prices rise (bullish retracement). During a strong downtrend, this is likely due to short-position holders (sellers) buying back their positions (buying back the borrowed shares at a cheaper price for profit), and contributing to demand. When bearish sentiment and selling intensity are strong, traders are eager to “sell the bounce”. When a downtrend is strong, bearish sentiment is strong, traders are looking for opportunities to enter the downtrend. Again, we can evaluate the momentum/strength of a downtrend by identifying the percentage amount prices rise before continuing the trend. If traders are “selling the bounce” expeditiously; prices will not “bounce” to a large degree before continuing the downtrend. 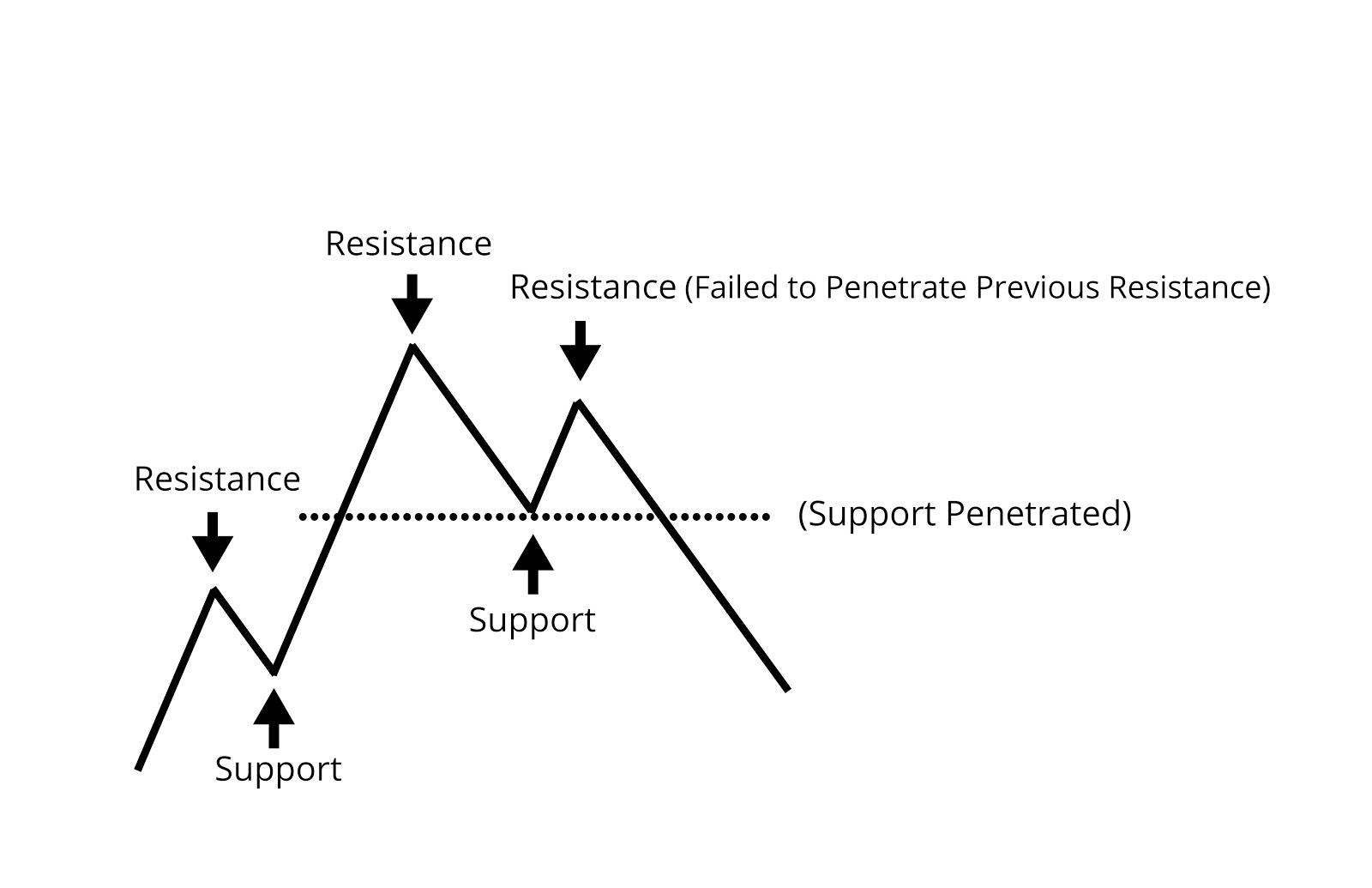 When a price sequence similar to figure 3.3 occurs, the uptrend may be in trouble. For this to occur, demand is no longer exceeding supply continuously. The valid penetration of the second marked support point in the illustration is critical to observe in a live market. When this occurs, we need to ask “Why is demand no longer strong enough to exceed selling intensity at a price area where it previously exceeded selling intensity?”.

The resistance point which was not violated to continue the uptrend is likely to function as major resistance in the future, especially if the level is an all-time high price for the underlying security.

When a price sequence similar to figure 3.3 occurs, the downtrend may be in trouble. For this to occur, selling intensity is no longer exceeding demand continuously. The valid penetration of the second marked resistance point in the illustration is critical to observe in a live market. When this occurs, we need to ask “Why is selling intensity no longer strong enough to exceed demand at a price area where it previously exceeded demand?”.

The support point which was not violated to continue the downtrend is likely to function as major support in the future.

In Figure 1.6, the price movement of $BAC tested and failed twice near the $25 price level. I marked both of these failures as resistance points. Similarly, $BAC found support near the $20 price level, as indicated by the early March and mid-April ovals that are marked “support.” Eventually, price movement did validly penetrate the $25 resistance point. $BAC then failed to sustain these relatively high price levels and gapped back down.

Backtesting Support Buying and Resistance Selling With an Oscillator

Let’s run a few backtests on range-bound markets governed by a major support and resistance level. We will use an oscillator to complement our system.

Excluding retracement percentages, it’s ill-advised to buy at minor support levels. We can’t definitively conclude there is strong demand at the correlative price area to cause an exploitable change in trend.

Sideways markets are usually bound between a major support and resistance level. When a market is range-bound such as this, supply (selling) and demand (buying) are at equilibrium – neither force is dominant enough to institute a sustainable trend. This particular market condition offers the best opportunity to buy at a major support level.

When buying at a pre-established support level you’re anticipating demand to exceed supply at a price area where it’s done so before.

Of course, a support buying strategy should be a constituent of an overarching comprehensive trading strategy.

Try to objectify your trading!

Join our Discord server! We will help you build a mechanical trading system and backtest it! We will send you the code; you can backtest the system on ANY stock at ANY time!

The servers getting a bit large.

Make sure to join before we are forced to close off access for a bit!

Check out our Youtube Channel for trading systems with code access! (You can backtest the systems at any time AND set alerts)

Legal Disclaimer: The information contained in the article is not intended as, and shall not be understood or construed as, financial advice. The author is  not an attorney, accountant, or financial advisor, nor are they holding themselves out to be, and the information contained in this article is not a substitute for a professional who is aware of the circumstances and facts of your personal financial situation.

Losses can exceed investment. Any stock mentioned throughout the article does not constitute advice or a recommendation. Any losses incurred that are due to error, accident, malfunction, or any loss due to any reason is not the legal responsibility or fault of the author.

The article reflects an expressed opinion from the author.

© Kioseff Trading. All rights reserved. No portion of this article, or any content on the website, may be redistributed or passed as one’s own without express permission from the author.